Gravitas is a new angel enemy that appears in the game, Bayonetta 2. First appearing in Chapter V chasing Loki to the top of the Cathedral of Cascades, Gravitas serves the same role as Fearless; it acts as a mini-boss, appearing alone or alongside its counterpart Urbane. He is shaped like a humanoid cannon with two glass orbs filled with ice-based energy and no head (which is uncommon with any Angel, proving the fact that Gravitas was a newly made Angel created to overpower Bayonetta).

"A Dominion in the Second Sphere of angels. The name Gravitas means stern and severe, so this angel is often depicted as steep, uninhabited mountains forever frozen in ice.

His extreme cold has been unpenetrated for eons, and it shows no change through the passage of time. Gravitas awaits silently for an opponent willing to sacrifice everything to face him."

Gravitas is an ice-based elemental angel, seen mostly in its primary forms of attack which it shares with Urbane. Its limbs end a mace-like weapon, being able to sweep it out a frontal arc, ram the weapon into the ground or fire the ball & chain from the air. It can also fire a large sweeping beam of ice from its head that will freeze Bayonetta on contact.

Upon being defeated, Gravitas may sometimes drop its mace weapon for Bayonetta to use. With its ice affinity intact, she can use it to perform a spinning attack that is great for doing major damage to crowds of enemies.

Like Urbane, Gravitas is a slow enemy and easily telegraphs its attacks. Due to the easy of activating Witch Time against it, most weapons in Bayonetta's arsenal will suffice in fighting it. Though attacking Gravitas's legs at ground level makes it safer to avoid its swinging arcs, aerial attacks against its larger top half with weapons such as Love Is Blue and Rakshasa can be more effective in dealing out quick damage.

In Christian mythology, Dominions are powerful angels that watch over the rulers of nations. 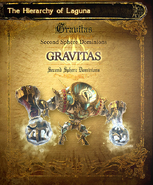 Retrieved from "https://bayonetta.fandom.com/wiki/Gravitas?oldid=50592"
Community content is available under CC-BY-SA unless otherwise noted.