Bayonetta
Gracious and Glorious are Seraphim of the First Sphere within the Hierarchy of Laguna.

Physically and in terms of their available attacks, these angels are very similar to Grace and Glory.

"Within the nine ranks of the angelic hierarchy, the highest-ranking Seraphim are charged with governing the love and zeal for the Creator. The pure white armored Gracious and the black armor-clad Glorious are often sighted in pairs; however, their existence itself remains a legend, subject to rumors of varied veracity.

Supposedly gifted with incredible god-like powers, there are no records of Gracious or Glorious appearing on the battlefield of evil; however, it is said this is because a mere taste of their power is enough to destroy the world, devastating all in its path - both the record and the record-keeper."

Gracious and Glorious are essentially stronger versions of Grace and Glory. They are immune to the effects of Witch Time.

Bayonetta can use Witch Time despite these enemies' resistance if she is equipped with the Moon of Mahaa-Kalaa.

Gracious and Glorious should not be faced with weak or slow weapons equipped (Kulshedra, Scarborough Fair, Lt. Col. Kilgore, or Durga Fire). Instead, it is recommended that Bayonetta use any of the following weapons to break through these enemies' defenses:

The term gracious means "courteous, kind, and pleasant." In Christianity, it refers to a "showing of divine grace."

The term glorious means "having, worthy of, or bringing fame or admiration" or "having a striking beauty or splendor that evokes feelings of delighted admiration."

In Christianity, Seraphim are the highest order of angels and are the closest to God. They tend directly to his throne, where they are said to sing hymns to him. 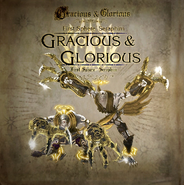 Gracious and Glorious as they appear in the Hierarchy of Laguna

An in-game model of Gracious as it appears in Bayonetta

An in-game model of Glorious as it appears in Bayonetta

Gracious, caught in a vice summoned via Torture Attack