Bayonetta
Graces and Glories are Virtues of the Second Sphere within the Hierarchy of Laguna. They are powerful humanoid hawk-like twin angels fought multiple times in the first game, Bayonetta. Grace has crimson bronze gloves that control fire and Glory has sapphire iron gloves that control electricity.

"Grace, draped in flame, and Glory, controller of lightning, are the twin escorts of the Creator. They share a wild disposition and are often depicted as gods of war, heroically leading the soldiers of Paradiso into battle, with their giant claw-like weapons being symbols of their ferocity. Humanity recognizes the increased spiritual power of twins, a power that comes from the blessings of Grace and Glory."

Grace and Glory almost always appear together, forcing Bayonetta to fight both at once. They can move out of Bayonetta's melee range with little effort and have extremely strong melee attacks.

Grace and Glory have nearly identical movesets, but Grace's moves are slower and wider than Glory's. They can extend their claws to attack Bayonetta from longer distances, and if one of them is at low health, it will fall back and prepare its unique attack. Grace's unique attack is a slow flaming tornado spin, which can be easily dodged into Witch Time. In Glory's unique attack, it sends an electrical charge in a circular area that can be dodged or jumped over, which has no effect if Bayonetta has Durga Lightning on the legs.

Their attacks are fast and powerful, but can be manipulated. At close range, they always attempt an overhead strike or uppercut that can be dodged or blocked with the Moon of Mahaa-Kalaa. Shooting with Scarborough Fair forces them to raise their claws and block, which delays their incoming movements.

It is possible, but difficult, to stagger Grace and Glory outside of Witch Time. Any Wicked Weave will stop them momentarily, as will a block from the Moon of Mahaa-Kalaa. The

combo also sweeps them to the ground.

In their Torture Attack, Bayonetta crushes them in a giant vise cranked with the left analog stick.

Near the end of the game, more powerful versions of these warriors appear, named Gracious and Glorious. They are similar to the original Grace and Glory but are clad in black and white golden armor instead of red and blue, and Bayonetta is incapable of triggering Witch Time against them without the use of an accessory such as Selene's Light, Moon of Mahaa-Kalaa, or the Bracelet of Time.

Due to Grace and Glory being incredibly agile in their movements and attacks quick weapons are best used when fighting them. Slow weapons like Lt. Col. Kilgore are almost entirely ineffective because of the slow sweeping attacks Bayonetta uses for her combos, usually allowing the Grace or Glory to recover and counterattack easily.

Onyx Roses: Their buckshot Charge Modifier allows the Onyx Roses to easily stagger both Grace and Glory should they stand too close to one another, and their quick small arms based combos allow Bayonetta to weave attacks between blocks and dodges more easily.

Odette: The multi-hit Charge Modifier on Odette allows it to quickly freeze either Grace or Glory, allowing Bayonetta to more easily combat its counterpart or any other Angels present.

In Christian theology, Virtues supervise the movements of heavenly bodies and maintain order. They are also responsible for overseeing the distribution and performing of miracles. 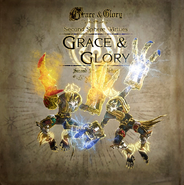 Grace from the angel model gallery.

Glory from the angel model gallery.

Grace/Glory's mask on the guillotine 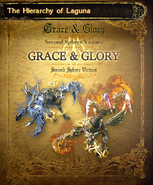