N/A
おいで、言う事聞かない子はお仕置きしてあげるわ！(I'm not one for pets who don't listen to their masters.)― Bayonetta, before she battles Gomorrah

Gomorrah, also known as the Devourer of the Divine, is an Infernal Demon and one of the primary demons Bayonetta summons in the first game. It eventually turns on Bayonetta and then becomes a boss enemy during the events of the second game, Bayonetta 2. A colossal, demonic dragon-like reptilian beast, Gomorrah attacks by biting, gnawing, and devouring any enemy it is set upon. The Third game Bayonetta 3 in return.

"A monstrous creature hailing from the demonic wood, Johnson Forest. Taking the form of a dragon, it is incredibly fierce, identifying all that moves as game and devouring its prey. Territorial, it is most likely to be found alone."

Gomorrah is one of Bayonetta's more common summons in the first game. It appears particularly during Climax Attacks against Beloved, proceeding to bite down furiously on the angel before crushing it to pieces between its mighty jaws.

Gomorrah also appears when it is summoned during Bayonetta's battle with Father Balder. Unfortunately, Balder is able to counter Gomorrah's assault by jamming its jaws open with a sphere of energy. He proceeds to exit the orb and smash Gomorrah's mouth shut on it, finishing off the wounded demon by snapping its neck, breaking the summoning though not killing the demon.

In the anime adaptation, Gomorrah appears near the beginning of the film where it destroys a Beloved with its jaws like in the game. It doesn't appear again until the climax of the film where Bayonetta attempts to summon it to combat Jubileus. However, the deity quickly forms a blade of energy and pierces Gomorrah's head, mirroring its defeat at the hands of Balder from the game.

Gomorrah returns in Bayonetta 2, during an angel attack in a city in which Bayonetta summons it to finish off a Belief in a similar fashion to Beloved. However, the portal manifesting Gomorrah's head fails to close and the demon seizes the chance to escape and attack Bayonetta. Before it is able to harm its former master, Jeanne dives into the path of the attack and knocks Bayonetta away. Gomorrah's strike knocks Jeanne's soul from her body and she is pulled down into Inferno. A winged Bayonetta takes to the skies to fight Gomorrah, scaling up the side of the skyscraper as the demon attempts to savagely lunge at the witch. As the long battle comes to a conclusion, Bayonetta summons Labolas and uses it to smash Gomorrah into the ground, both demons vanish.

Gomorrah does not make an appearance again until Chapter XII; Bayonetta is running through Inferno on Diomedes to get to Loki. Gomorrah will attempt to obstruct Bayonetta's journey through the area twice and must be dodged to avoid incoming damage.

Gomorrah appears briefly in Chapter XIII at the climax of the battle against Beloved. After Bayonetta and Rosa defeat the angel, Rosa summons Gomorrah along with Bayonetta summoning Labolas, the two demons then collaborate to tear the angel apart, with both of them letting out a ferocious roar before disappearing back into Inferno.

Gomorrah's final appearance in the game is during the climax of the final battle against Loptr/Aesir. After Balder and Bayonetta summon Omne, the fusion of Jubileus and Sheba, to kick Loptr's body off the top of Fimbulventr, Jeanne proceeds to successfully summon Gomorrah on an incoming fighter jet. The demon waits patiently before snatching Loptr's physical body into its jaws, gnashing and chewing at him before swallowing him whole.

In the first Bayonetta, only Gomorrah's head and neck are seen due to it only being partially summoned. In Bayonetta 2, when the demon breaks free from its summoning portal, its entire body can be seen. It appears as a massive black dragon-like beast, easily over one hundred feet in length from nose to tail. Though it is primarily black in color it also has red and purple accents about its body. Unlike classic dragon designs, Gomorrah possesses six legs.

Upon Gomorrah's head is a strange crown-like ornament with what looks like a face set into the front of it. This is actually the demon's true head with the dragon features only acting as a dummy. Gomorrah's dragon head has four glowing dots on either side that appear like eyes, and its mouth is lined with dozens of fangs that frame a twisted forked tongue. It has long serrated horns on its head, back, and down the sides of its body all the way to the end of its tail with a thick heavy chitinous hide that layers across its body similar to segmented plates of armor.

Despite having multiple dragon-like features, Gomorrah seems to lack wings of any kind.

Gomorrah's main strength is its biting power, able to pick up titanic angels and crush them easily between its jaws. When it is fully manifested, the demon is able to breathe streams of crimson fire akin to a traditional dragon. It relies primarily on lunging bites, swipes with its massive claws, and huge sweeps with its powerful tail to do damage.

During the final phase of the fight against it, Gomorrah's variety of attacks increases and it displays incredible speed. It is capable of breathing in a vacuum with such intensity that Bayonetta cannot escape it, even with the assistance of Malphas' wings. It is also shown to be able to vomit massive spheres of bloodied flesh and skulls at Bayonetta, similar to its fire-breathing attack from the first game.

Gomorrah, and its sister city, Sodom, were two cities that appeared several times in biblical texts as cities wallowing in the sins of mankind. In the texts, divine judgment was passed upon Sodom and Gomorrah, and due to their unclean wickedness, the cities were consumed by the wrath of God in the form of fire and brimstone that rained from the skies.

Gomorrah appears in Super Smash Bros. for Nintendo 3DS & Wii U and Super Smash Bros. Ultimate as part of Bayonetta's Final Smash, Infernal Climax. After building up the meter upon initial activation, Bayonetta will summon Gomorrah to snatch up all enemies that were attacked and begins chewing them up as in the original games. Anyone at 100% or above will be instantly KO'd. 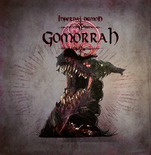 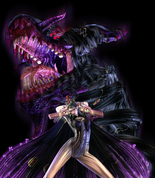 Artwork of Gomorrah and Scolopendra.

Gomorrah summoned by Bayonetta/Zero in the demons model gallery.

Gomorrah summoned by Jeanne in the demons model gallery.

Gomorrah is defeated by Father Balder.

Gomorrah and Temperantia in the prologue of Bloody Fate. 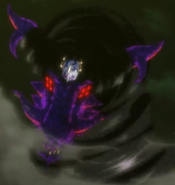 Gomorrah when summoned against a Beloved in Bloody Fate. 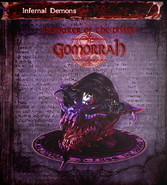 As seen in the Book of Infernal Demons in Bayonetta 2.

An early concept image of Gomorrah's body in Bayonetta 2, giving it dinosaur-like features. 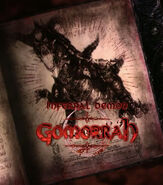 Gomorrah's initial introduction in an early build of Bayonetta 2.

Gomorrah's final introduction in Bayonetta 2, naming him "Devourer of the Divine".

Gomorrah's model clinging to a skyscraper in Bayonetta 2.