Glamor is an angel that appears in the second game, Bayonetta 2. It was first shown in the initial development trailers and then later during gameplay demos at E3 2014 and ComicCon 2014.

"Glamor, as a First Sphere Seraph, rests at the highest rank in the angelic hierarchy. Seraphim are the closest beings to God in existence and cannot be seen by humans in the physical world under any circumstances.

Yet, since the dawn of history, there have been discoveries of statues depicting a six-winged snake traversing the heavens. Most likely these have some connection with The Book of Revelation, written by a Lumen Sage and found in the scriptures of Ithavoll.

Of course, this means there must have been a sage capable of connecting to Paradiso and conversing with Glamor through spiritual means."

Glamor appears as a flying serpent-like dragon covered in gold decorations and jewels. It has a large upside-down face below the serpentine hood which it talks through and operates its entire body with, though the dragon head it possesses is mainly used to utter beastly roars and bite its foes. Glamor uses large golden wings to fly.

Glamor's most prominent feature is its extremely long body with multiple clawed legs like a centipede, with regular halos across its body. Its length is even far longer than the already long Inspired and almost appears as an angelic version of Scolopendra.

Aside from his natural abilities of flight granted by its wings, Glamor has multiple offensive capabilities that include firing ice spikes from its dragon mouth, possessing enough strength to slice an aircraft in two, and destroy an entire street with its bulk alone. It also uses multiple sweeping bites forward and is remarkably agile for a creature its size.

The Glamor fought in Chapter XVI retains these abilities.

In the Prologue, World of Chaos, though it is not fought directly, Glamor makes an appearance destroying various buildings in the city, intent on catching Bayonetta throughout the second part of Verse 1. Glamor takes swipes and dives at her until it knocks her plane out of control and then slices it into pieces.

Glamor reappears again in Chapter I: Noatun, The City Of Genesis after uprooting and destroying an alleyway in Noatun. It addresses Loki as the "Sovereign one" and plans to take him to another being named the "Prophetic one", which Loki sarcastically refuses. After Bayonetta interferes, Glamor states that this is not her fight, but it will be her end. It engages in combat with Bayonetta in an intense battle but ultimately loses when the witch summons Madama Butterfly. The demon steps on Glamor and proceeds to stomp on it like a Flamenco dance until the last stomp sends it flying back down to earth.

Glamor returns yet again in Chapter III: Paradiso - The Gates of Paradise for a rematch against Bayonetta. The angel kidnaps Loki as the pair of them approach the Cathedral of Cascades and a fight then takes place in a waterspout created by Glamor. Bayonetta proceeds to chase it surfing on debris until she arrives at the Gates of Paradise in Paradiso, where she fights not one but three Glamors. Eventually, she defeats all three with the Infernal Demon Diomedes which proceeds to slice them up with its large blade-like horn. The main Glamor addresses her as the Overseer of Darkness and states that Loki will never be allowed to reach Mount Fimbulventr, Bayonetta shoots Glamor's mouth, causing it to dispense Loki, before Bayonetta can rescue him Glamor makes a last-ditch effort to attack Bayonetta with its projectile ice spikes, separating the two. Glamor then laughs maniacally as it is dragged to Inferno.

In Chapter XVI: Sovereign Power, Glamor appears as the first mini-boss during the Jetfighter Assault portion of the chapter, this one attacks the same as the Glamor in Chapter III. After punching and slashing it into oblivion, Bayonetta, Balder, and Jeanne proceed closer to Mount Fimbulventr. 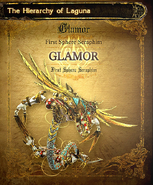