Fury, also known as The Gatherer of Rancor, is the most basic of the Infernal Demons. Appearing frequently throughout the second game, they act as the infernal version of Compassion and Decoration.

"A demonic bird that gathers in Inferno's Johnson Forest. It possesses the wings of a bat, head of a dragon, and tail of a snake. It visits the bedrooms of hysteric humans nightly, caws in their ears until they weaken and die, then they devour their flesh.

There are some who have tried to escape from its curse, but its terrifying cyclops gaze ensnares its target as if it were petrified."

Fury only has a few basic attacks. It can perform a simple claw slash attack similar to the one Compassion uses, only being weaker and having a shorter range. It can also slow down Bayonetta's movements with special magic shots from its single eye. Like when slowed down by Light Speed during the Masked Lumen fights, wiggling the joystick back and forth repeatedly when frozen by these shots will free Bayonetta from the Fury's magic.

Because they are akin to Compassion and Decoration are in the same type, any weapon in Bayonetta's arsenal can be used to combat Fury is effective. Though the short range of melee-based weapons such as Rakshasa can make Fury hard to hit, they become much more manageable if Crow Within or a wide-range Umbran Climax is used against them.

As ranged weapons, both Love Is Blue and Kafka are great to attack Fury from a distance. Alruna's range and, a wide area of damage when using Bullet Climax with the weapons also make large groups of Fury easy to dispatch. 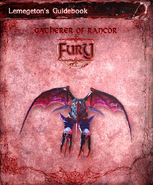 Artwork of Fury with its mouth closed