None
To deceive a human is but an easy task. They live in chaos. Desire chaos. Now, it is time you discover death. The witches and sages who rule this realm must be exterminated. The Eyes must return to their rightful place!― Fortitudo, Bayonetta 2

Fortitudo was one of the four Auditio of the Hierarchy of Laguna seeking the Left Eye of Darkness to resurrect Jubileus and personifies courage and fortitude of the Cardinal Virtues.[1]

He acts as both a mini-boss and a later boss in the first game, Bayonetta. A past version of himself later appears in the second game, Bayonetta 2, present when the Masked Lumen is taken to the future by Loptr and during the Witch Hunts.

"Amongst the spiritually powerful of the Middle Ages, it was thought Paradiso held for all a Divine Will, and as a result, they developed heavenly logic. The concept of the "Cardinal Virtues" was born of this logic, and classifies Paradiso's Divine Will into four broad groups.

These Cardinal Virtues occasionally become physical manifestations of the great intentions of Paradiso, and are known as the Laguna, inspiring awe in the masses. Personifying courage and fortitude, Fortitudo has been depicted as a terrifying being sporting an enormous face and two dragon's heads. He is said to be capable of summoning magma flows at will."

Fortitudo is, like all Auditio, colossal in size compared to other Laguna. He takes the form of a two-headed dragon (which function as hands) coated in metal armor on the heads, necks, and partly on the wings, with jewels of similar colors on each forehead. The color of this armor is different for both sides, the left being blue and the right being red. His most prominent feature is the large upside-down face (which is a common trait on most Laguna, particularly his fellow Auditio) on his chest, which he talks through and operates his entire body with.

Fortitudo has shown to possess a wide range of abilities. Natural abilities range from flight granted by his wings and breathing fire. He also possesses brute strength, frequently crushing structures and lifting a church into the air with one "hand", and being able to lift his own weight with his wings (far above normal atmospheric degrees). He does have more supernatural powers; he can teleport to different locations to speed up travel and cover areas in lava. He also seems to possess the ability to stand on walls, like some Laguna. Fortitudo speaks in the ancient language of angels, Enochian, that only the Lumen Sages and Umbra Witches understand.

This article is a stub. You can help the Bayonetta Wiki by expanding it.

Later confronted by Balder on the true nature of the Witch Hunts, Fortitudo reveals that they had tricked Balder into thinking that the Umbra Witches were planning a rebellion and expressed their desire to end both the Lumen and Umbra to reclaim the Eyes of the World and bring forth Jubileus, The Creator. After Rosa is killed by an unknown figure and Balder from the past is brought into the future, Fortitudo is also taken alongside him in some manner.[2]

During the Masked Lumen's first battle with Bayonetta, Fortitudo is summoned, destroying the area used by the sage and Bayonetta for their battle, Bayonetta summons Labolas to deal with the Cardinal Virtue. Eventually, the demon gains the upper hand and will defeat Fortitudo by mauling him in mid-air, with the sage impaling Labolas in the forehead with his glaive.[2]

Eventually arriving back into the past when Balder and Bayonetta are transported through time by Loki, Fortitudo appears and spots the two witches, Bayonetta and Rosa. He then flies down to fight them both, but they overpower him enough to grab both of his dragon heads and throw him away. After Bayonetta and Rosa defeated Temperantia from the cliffside of the clocktower, Fortitudo appears and destroys the clocktower with a fireball. Aiming a fireball at Bayonetta and Rosa next, the former grabs the latter before both of them can be struck, destroying the part of the cliff and sending both witches down into the Crescent Valley.[2]

Fortitudo appears more frequently than most Auditio, as he leads the lower Laguna against the Umbra Witches. He first appears in the first scene in the game, far out of reach, where he fires fireballs at Bayonetta and Jeanne as they are fending off the warriors of Laguna.

During the first chapter, he personally fights Bayonetta and two other witches in a flashback sequence just outside the ancient city of Vigrid but retreats after sustaining enough damage. He later ambushes Bayonetta but is defeated.

He appears yet again to taunt and persuade Bayonetta to assist them in reviving The Creator. After exchanging insults with the witch, Fortitudo vanishes, just before unleashing a fiery cataclysm upon the city, overflowing the streets with lava and sending more angels to try to kill her.

Afterward, Bayonetta proceeds to a ruined Colosseum, where Fortitudo once again appears and attempts to persuade her to aid the angels. Bayonetta remains unconvinced, so Fortitudo challenges Bayonetta to a final battle. During the battle, he attempts to use his pyromancy and his fangs to subdue her, but to no avail. After sustaining the brutal injury, he retreats to the rim of the Colosseum and reduces the arena to a lake of fire. Bayonetta pursues her enemy using Witch Time to successfully navigate through the flying rubble. When she reaches Fortitudo, she pulls the hapless angel to the floor and decapitates one of his draconic heads. The detached head flounders helplessly while the hands of Inferno drag it into their realm. After Bayonetta removes his other head, Fortitudo obliterates the entire Colosseum in a desperate attempt to kill his enemy. However, Bayonetta escapes on a floating chunk of masonry and attacks once more. Fortitudo attempts to use his bulk and his tail to defeat the witch. However, he makes the fatal mistake of lashing out with his tail, as Bayonetta simply grabs his tail and flings him into the distance. With him stunned, Bayonetta summons a demonic bird of prey named Malphas. Malphas then proceeds to jab at him with its beak before tearing a hole through his face. Bayonetta then shatters the floating parts of the Colosseum, strikes the loose debris toward Fortitudo, then deactivates her Witch Time. The debris, freed from Witch Time, flies toward Fortitudo with frightening velocity before striking him. The multiple blows are too much for him and he is left mortally wounded.

Fortitudo, his face disfigured with a massive hole, speaks his final words, and compliments Bayonetta on her magnificent power. He then reveals to her that he is just a small sacrifice for the resurrection of "The Creator", Uttering a final prayer, he is banished to the depths of Inferno.

Fortitudo appears in Bloody Fate, overseeing Jubileus' hibernation in Paradiso. During Bayonetta and Jeanne's last fight, Fortitudo spirits both of them into Paradiso when he feels the latter is hindering the resurrection of Jubileus. Jeanne's response is to throw remarks, shoot at him, and tell him to go away. Scoffing off the bullets, Fortitudo then flies away, telling Bayonetta he will wait for her at the side of Jubileus.

When Bayonetta regains her memories of the Witch Hunts and Rosa's death, Fortitudo and several Temperantia appear before her and Jeanne, coming to claim the Left Eye. Jeanne intervenes, stabbing Bayonetta and sealing her inside the red jewel of the latter's Umbran Watch.

In the present, Bayonetta and Balder take their places as the Eyes of the World, Fortitudo and several Affinity then sacrifice themselves to Jubileus in order to empower her, disappearing into small sparkles of light.

Fortitudo represents the element of Fire and is based on the cardinal virtue of fortitude/courage/strength. His design could be seen as a cross between a Cherub (which has the faces of multiple animals), and a Seraph (who are, in mythology, draconic angels).

Fortitudo is largely inspired by medieval depictions of Archangel Michael: both are associated with fire and lead the divine armies, and are the member of their group that shows up most prominently. When not described as an "archangel", Michael is often described as a seraph or cherub, which may account for Fortitudo's appearance. 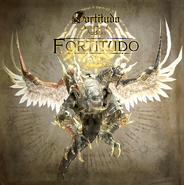 Fortitudo in the boss model gallery.

Courage, from the angel model gallery.

Fortitudo prepares to shoot down Bayonetta

Fortitudo after his dragon heads removed

As seen in Bloody Fate

Fortitudo as seen in Bloody Fate during the Witch Hunts 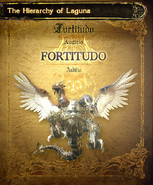 Summoned by the Masked Lumen

Fortitudo in a memory, declaring both clans must be exterminated