Fidelity is a new angel in the second game, Bayonetta 2. Similar to Harmony from the first game, Fidelity acts as the underwater-themed angel of the game. Fidelity belongs to the Third Sphere of the Angelic Hierarchy.

"Considered a creature of the sea due to its fish-like body and multiple tentacle-like arms, Fidelity departed from the ocean to impart humanity with their primeval memories.

Those who forgot their past and begin to disrupt the serenity of life are often dragged by this angel to the darkest depths of the ocean.

The ocean is a sacred place, the area of Earth that is closest to Paradiso, as the intense water pressure of the depths means it has remained untouched by human hands since the beginning of time. A large celestial veil covers the sea's expanse, and until this day there has never been a human who has witnessed the seas in their entirety."

Fidelity is a jellyfish-like angel with a round body adorned with several golden fins. At the front of its head are three human faces, that converge at a small hole on the front that acts like a mouth. Behind its body, several tentacles with gold spike ornaments stick out, and Third Sphere halos hover around each tentacle.

Fidelity uses its tentacles to create blades of red light, similar to the blade of Bloody Moon from the first game, which it then uses to slash at Bayonetta. Despite its aquatic appearance, Fidelity can appear on land or underwater where it either swims or walks on the ground with its tentacles. As shown in some of Muspelheim challenges, Fidelity has the ability to "swim" in midair. The angel can also release a series of energy bubbles that act as floating mines, damaging Bayonetta if she touches them. Another of Fidelity's attacks is to pounce on Bayonetta and pin her to the ground as it charges up a laser attack. If Bayonetta doesn't escape in time, Fidelity will fire its laser at point-blank range, dealing moderate damage.

If a Torture Attack is performed, Bayonetta will put the angel in a demonic rotisserie device, trapping it in a cylindrical cage with knives pointing inwards towards it. She will then rotate the cage over an intense fire rapidly before finally leaving Fidelity to burn.

In Christian mythology, Archangels either occupy the second lowest or the very highest rank of angels. Additionally, there are seven specifically named archangels that stand before the throne of God. Gabriel and Michael are the only two named in 66 books canonical Christian Bible, with the others mentioned in various Apocrypha.

Fidelity closely resembles descriptions of Rahab (רַהַב), who is described as a horrific angel that takes on the form of a gigantic sea creature. It is occasionally referred to as the "demonic angel of the primeval sea". 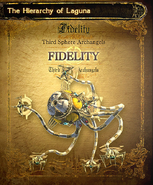 Fidelity's Torture Attack. The text at the bottom reads CREMATION 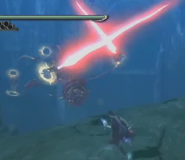 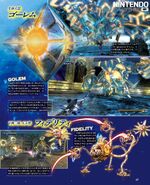