Fearless are Dominions of the Second Sphere within the Hierarchy of Laguna.

"Fearless are classified as Dominions, the fourth rank amongst the hierarchy of angels. Controlling the lightning feared by many as the instrument of divine justice, Fearless make known the majesty of God to the masses.

Almost all of the naturally occurring lightning in the world is a result of the actions of these angels. It is said that divine wrath against gluttons is released in the lightning's flash, as the thunder signals heaven's roar."

Fearless is swift enemies that have an affinity for lightning-based attacks. While they are not as powerful as their blazing fire cousins, Fairness, Fearless possess a wide variety of attacks: they pounce at their opponents, launch their tails at them, and they can fire a sweeping beam of lightning from their mouths.

Bayonetta conjures a massive, spiked wheel and slams it onto the Fearless' back. The Umbra Witch proceeds to kick the wheel into motion; it rolls away, killing the Fearless.

In Christianity, Dominions are powerful angels that watch over the rulers of nations.

Fearless has blue-skinned bodies of a panther/lion covered in holy symbols, a suit of red and gold armor, gold claws, golden light halos around its ankles, a thin tail ending in a double ax bladed tip channeling lightning, mechanical wings, and a bird-like head covered in a golden bell-shaped helmet with no eyes visible, and a silver beak.

Fearless as it appears when introduced in Bayonetta 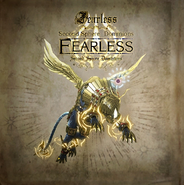 Fearless as it appears in the Hierarchy of Laguna in Bayonetta 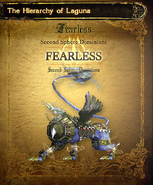 An in-game model of Fearless as it appears in Bayonetta

A Verse Card depicting both Fearless and Fairness