Bayonetta
Fairness are Virtues of the Second Sphere within the Hierarchy of Laguna. They are large dog/draconic-like angels that have molten skin and are enveloped in flames. They first appear in Chapter III of the first game and are commonly regarded by players as one of the more difficult enemies to combat in the game effectively.

"A Virtue charged with the administration of miracles, it is wrapped in flames when appearing in the physical world, a power emblematic of its courage. A torrent of flame blazing as bright as the sun, these flames become the light that burns away darkness from those who receive the graces of a Fairness. However, for those out of the angel's good graces, they are the fire and brimstone of destruction."

Slow-moving, but incredibly powerful, their deceptively slow walking pace belies their agile attacks and dashes. Fairnesses are very good at controlling their position in relation to Bayonetta. Despite being wreathed in flames like Affinity E and Ardor B they do not cause harm to Bayonetta when she attacks them with melee hits and can be damaged normally like any other Angel. Fairness usually appears in pairs with either another Fairness or more commonly their electrical counterpart, Fearless.

Fairness can launch a ranged blast of lava. If in melee range, the Fairness will first dart backward before firing, otherwise this attack has little to no animation cue to warn the player before it is used, and the projectile itself flies incredibly fast, making it more difficult to evade once fired.

Despite having this ranged attack the Fairness will rarely use it, instead, it will usually opt to use one of three different dash attacks. The first of these attacks is a simple short-leap forwards with its mouth open, this attack is deceptively fast, has a deceptively large radius in which it can hit Bayonetta, and lasts very long despite its animation of being quite quick, if this attack lands, the Fairness will bite down on Bayonetta with its jaws, and whip her back and forth once before tossing her to the side and slamming her into the ground. This attack does very high damage, and its strangely large and fast animation makes it difficult to avoid even if the player sees it coming. The second dash is a variation of the first, save that it's used when Bayonetta is in the air. Using the Crow Within technique is very dangerous whilst fighting Fairness, as it snatches you almost with no warning from the air.

The third and final dash is a reckless charge, unlike the first two dash attacks, this one has a bit of an animation cue where the Fairness will dig its claws into the ground to prepare to push itself forward. After this, it will run at Bayonetta in a straight line with its head down in an attempt to headbutt her. If this attack causes the Fairness to collide with a solid object, such as a wall, they will be stunned and Bayonetta can attack it freely for a few seconds before it recovers.

The Fairness' final attack has a long visual cue where it will set itself in place and do a howling roar up at the sky. This attack causes no direct damage, but the noise will cause Bayonetta to grab her ears in agony, effectively stunning her in place. The stunning effect can be dodged just like any other attack. If stunned, shaking the joystick back and forth will help Bayonetta to recover more quickly, however on higher difficulties this rarely helps. To counter this attack effectively the Moon of Mahaa-Kalaa must be equipped, as it will allow the player to defend from oncoming attacks even when Bayonetta is stunned.

For the Fairness' torture attack, Bayonetta will summon a massive spiked wheel, which she will slam down onto the Fairness' back before kicking it, causing it to grind into the Fairness for a few seconds before the spikes catch and roll it away, where it will eventually collide with a wall or simply explode.

Onyx Roses: Due to their mix of high power, speed, and generally high stagger rate, the Onyx Roses are a potent weapon to use against Fairness. Their size allowing the majority of Onyx Roses' buckshot Charge Modifiers to deal massive damage quickly, while also staggering them and ridding them of their armor.

Durga Fire: Its mix of long sweeping and hard-hitting attacks, combined with its incredibly powerful Charge Modifier make Durga Fire a strong weapon against Fairness, especially when they're clustered together.

Odette: Though not particularly potent against Fairness with its direct attacks, its Charge Modifier allows it to quickly freeze a Fairness, allowing Bayonetta to more easily combat the other Fairness or any accompanying Fearless.

Bazillions: A good choice against Fairness primarily because of its Charge Modifier when it is equipped to the hands' slot, which will not only stagger the Fairness it's fired at, but also usually force them to evade with a backflip or side-jump. It also causes massive damage, shreds armor easily and will cut through any other Fairness or Fearless in the line of fire.

In Christian mythology, Virtues supervise the movements of heavenly bodies and maintain order. 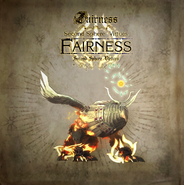 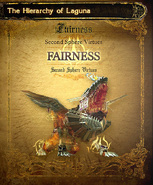 Fairness in the angel model gallery. 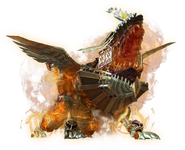