Main Universe
Enzo is an undertaker and a underground informant whom befriended Bayonetta shortly after awakening from her five century-long slumber and is a frequent patron to the Gates of Hell.[2]

In the first game and similarity in Bayonetta: Bloody Fate, he provides her with crucial information that leads her to Vigrid as she sought out what she believes to be the Eyes of the World. Later in the sequel, Bayonetta 2, Enzo later runs into Bayonetta during her Christmas shopping and takes her to Noatun, much to his chagrin.[3]

Enzo is portly in body shape and boasts a deep coarse Brooklyn accent, keeping his hair in a ponytail and having rather long sideburns. In the first game, he wears a green winter coat and red scarf, the suit underneath being black with a white shirt. His shoes and gloves are a brown color and his gloves feature many different rings as if to display what wealth he has. Enzo also has a round black hat and wears dark-lensed glasses with black frames.

In Bayonetta 2, Enzo has a new outfit to match the rest of the updated character looks. His coat is now a purple color and is much longer than before, with a white scarf hung loosely around the neck. The suit underneath is now a lightened grey color and he wear a pink striped shirt and green tie underneath it. Enzo keeps his gloves, multiple rings and hairstyle and wears a white hat to match the rest of his outfit.

With an attitude that shows a lust for money and wealth, possibly from the more shady activities an information broker gets involved with, he has been a frequent customer of The Gates of Hell and consequently owes Rodin a lot of money as part of a tab he can't pay off. Enzo is always looking to increase profits for himself, even using a string of suicides by human followers of Jubileus the Creator to overcharge clients for funerals. After meeting Bayonetta, he proclaims to hate the angels and even says he'd beat them up if he could see them. Bad luck seems to follow Enzo and he frequently finds himself in crazy and humiliating situations just from being around Bayonetta, especially when the angels appear.[2] Despite his appearance, however, Enzo is a devoted family man and loves both his kids and wife dearly.[4]

Enzo makes his first appearance during a funeral for the renowned Eggman, seeming glad at the situation and cracking jokes, though failing to get a reaction from the nun performing the ceremony. As the nun reveals herself to be Bayonetta, Enzo tries to take cover from the ensuing fight and is briefly carried off by the angels. When Bayonetta goes to save him, she accidentally wrecks his car by landing on its hood, with Enzo unaware of who did it because like many humans, Enzo can't see beings in Purgatorio. After the angels have been taken care of, Enzo is taking Bayonetta to the Gates Of Hell when the pair of them are attacked again. Jeanne and the angels crash a transport plane into the highway and Bayonetta keeps him from harm until her opponent vanishes. They eventually make it to Rodin's.

Enzo gives Bayonetta the information he has regarding the Eyes of the World, explaining how the apparent second stone of the pair was recently put on the black market. Having tracked down the original seller, he points her towards the European city of Vigrid as part of their deal of taking care of Eggman's funeral for information.

Enzo doesn't make an appearance again until the end of the game when he is attending Bayonetta's apparent funeral with Rodin and Luka. He is quickly forced to hide himself from the sudden fighting that breaks out as it is revealed the funeral was another ruse in order to lure the angels. In the post-credits scene, Bayonetta is shown to have once again destroyed his car, much to Enzo's dismay.

Enzo serves as the main source of information regarding Bayonetta's circumstances in Bloody Fate, though not as in depth as in the game. Having a less comical personality, Enzo provides Bayonetta with information on Father Balder and his sudden appearance in public to coincide with the Resurrection festival of the Ragna. He appears near the end of the film, a year after the battle with Jubileus, pondering with Rodin as to where Bayonetta has gone.

Enzo returns in the sequel in a similar role to the first game. He is initially forced to help Bayonetta with her Christmas shopping whilst trying to buy his own presents for his children. After narrowly avoiding being run over by Jeanne on her bike, Enzo is buying a fighter jet toy when he sees a real jet from the Platinum Stars display team heading straight for him as a result of the angels attacking the city. Bayonetta manages to kick it away and save him before fighting the angels herself. He is later seen in Rodin's car as the weaponsmith drives along the side of a building in order to gift Bayonetta with her new set of guns.

At the Gates Of Hell, after Bayonetta plans her next move in order to rescue Jeanne's soul from Inferno, she forces Enzo to take her there and provide information on the sacred mountain of Fimbulventr. With heavy reluctance, but with no real say in the matter, Enzo travels with her to their destination. During the journey, he explains to Bayonetta how the mountain is supposed to link both Paradiso and Inferno to one another and that the actual gates to Inferno have never been found by human hands. As they approach Fimbulventr in a small plane, Bayonetta bids him farewell and jumps off, revealing that she had been controlling the aircraft with her magic and leaves Enzo to panic about how he is supposed to land.

At the end of the game when Bayonetta and Jeanne are out doing some post-holiday shopping, Bayonetta prepares to hand her shopping bag to Enzo before realizing that he isn't with them, and then remembering that she left him in the plane. The two witches look up to the sky to see Enzo has returned in his plane, with a flock of angels after him. The two then kick the plane into the air, jump on it, change into their umbran battlesuits and prepare to fight the angels.

Concept art of Enzo from the first Bayonetta. 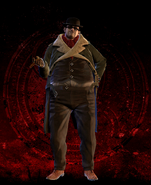 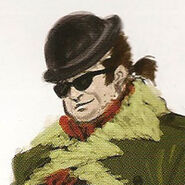 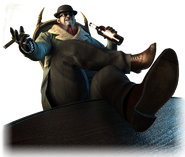 Concept art of Enzo from Bayonetta 2.

Shopping with Bayonetta, albeit unwillingly

Enzo, witnessing the Platinum Stars jet heading for him in Bayonetta 2.

Enzo in the cockpit of the plane in Bayonetta 2.