Enrapture is a new angel that appears in the second game, Bayonetta 2. It was first shown in the initial development trailers and then later during gameplay demos at ComicCon 2014. Enrapture belongs to the Third Sphere 'Archangels', and is the angelic counterpart compared to Malicious.

"Though eighth in the angelic hierarchy, Enrapture was born many eons ago and is now considered the oldest angel to have ever existed.

Given the task of leading humans to bliss by speaking directly to their spirits, it is said that the concept of faith did not exist until Enrapture's creation.

There are only theories debated as to why this angel possesses its strange form of two human bodies seamed at the torso; perhaps, their shape is meant to exceed the bounds of human understanding, or maybe, in the depths of meditation, a monk approaching enlightenment caught a glimpse of this angel while its form was refracted between dimensions."

Enrapture is a small angel with a roundish body that has two red, piercing eyes in the middle and is decorated with gold lace, and ornaments. It has four limbs at the corners of its body, each ending in a claw that has golden bracelets around the wrists. Enrapture carries a large staff in the shape of a sun motif, complete with red and green jewel decorations. Enrapture also floats through the air to move around.

Enrapture acts as a spellcasting angel that never appears alone, it will always stay at range from Bayonetta to remain safe as the other angels in the group fight, Enrapture has very little health and should always be killed first due to the frustration brought on by its abilities. If Bayonetta is in close range to Enrapture, it may attempt to swing at her with its staff, it can also fire glowing orbs of energy at Bayonetta from a distance and attempt to cast a magic coil to ensnare and incapacitate her.

Enrapture's second-most powerful spell is the ability to steal Bayonetta's magic, Enrapture will start spinning its staff around before purple orbs representing Bayonetta's magic are stolen from her.

Enrapture's most powerful and dangerous ability is the power to enrage its comrades as if they were affected by a taunt or Gaze of Despair. Enrapture must channel to maintain this spell, so any damage will interrupt the effect. If there are two Enraptures on the field, one will usually use this ability first. Additionally, the enrage effect will not affect other Enraptures.

Near-death, Enrapture may attempt to lunge at Bayonetta, if it does the player must shake it off with the joystick otherwise the Enrapture will suicide and explode, dealing a portion of the damage.

If Bayonetta uses a Torture Attack on Enrapture, the angel will be trapped inside a device that twists its body from the top and bottom until it is torn into two pieces. Its staff can then be picked up as an angel weapon for Bayonetta to use.

When using the staff, Bayonetta will steal magic orbs (and health if the player is damaged), the amount of magic and health will be taken depends on the number of enemies on the field. The staff can only be used twice before it disappears.

Enrapture's initial concept art in The Eyes Of Bayonetta 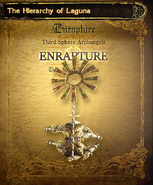 The torture attack for Enrapture 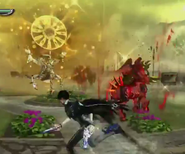