Bayonetta
Enchants are angels of Third Sphere within the Hierarchy of Laguna.

"An Angel shaped like a cart wheel. The impetus behind this fateful form was the Creator's desire to craft an Angel designed to compel humanity to continue its struggle and feel no satisfaction at surpassing others.

Enchants protect the field of God from human encroachment and are further responsible for passing communication to Paradiso and correcting the trespasses of humanity."

Enchants are fast and use fire as their main element. They are capable of splitting themselves in half and rushing Bayonetta to electrocute her, or merely ramming her to set her ablaze. Both attacks do minor damage, but the electrocution attack does a bit more.

Enchants can also be found attached to the walls and floor. In this state, they do not move but can fire extremely fast spheres of lightning at Bayonetta. Dodging these allows for Witch Time, but since they are so fast, it's not advisable to use them for this purpose. Approaching an Enchant that is in the wall or floor will prompt them to remove themselves and act as a normal Enchant would.

If one is weakened and stunned, Bayonetta can grab one and spin it around, which causes heavy damage to anything it hits. After a predetermined time frame, Bayonetta will throw away the angel, killing it.

In Judeo-Christian mythology, Angels, malakhim are the lowest order of the angelic hierarchy, and the most recognized. They are the most human, and most concerned with humans, and were usually depicted as the traditional winged humanoids with halos that pervade popular culture. 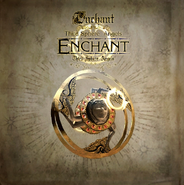 Enchant in the angel model gallery.