N/A
Diomedes, also known as the Severer of the Dark, is a demon that appears similar to a fanged horse with a large blade protruding from its forehead, similar to a unicorn. It appears in the game, Bayonetta 2 as the basis for certain Climax Attacks, Diomedes is one of the more prominent demons in the game.

"One of the four man-eating horses that were owned by the ruler of a fallen kingdom.

With the demise of the kingdom, the horses were murdered and arrived in hell. Of the four, the soul of one inherited the name of the king and was reborn as a demon.

The large blade extending from its forehead is a soul reaper that leaves a trail of mutilated dead in whatever direction it runs.

Though it typically hates being treated like a horse, it tolerates those who have proven themselves worthy."

Diomedes makes its first appearance at the end of Chapter III as the Climax Attack against the three Glamors. When the three angels are about to strike at Bayonetta, Diomedes appears just in time to intercept the attack with its large, sword-like horn. It then flings the Glamors into the sky, where it slices them at a blinding speed, causing them to explode into gory chunks.

The demon appears again in Chapter V and acts as a Climax Attack once more. This time, the attack is directed at the newly-introduced Pain. In a similar fashion to Glamor before it, Diomedes slices the demon at an incredible speed, completely eviscerating it.

Diomedes' final story appearance is in Chapter XII, where it instead acts as a mount for Bayonetta as she hurries across Inferno to the aid of Loki, under attack from the Masked Lumen. Bayonetta can have Diomedes slash at incoming enemies with its horn and activating Umbran Climax under these circumstances will have Diomedes fire wave-like projectiles with every slash.

Outside of these appearances, Diomedes is the demon assigned to Rakshasa in Umbran Climax, where it will fully manifest to attack enemies. It also appears the Torture Attack executed on an airborne Hideous, where it kills the demon with a single horizontal slash.

Diomedes appears as a large, black horse with four long spikes adorning both of its sides at the top of its body and red flames appear in place of a mane and tail, and eight legs, four in front and four on the back. Its most striking feature, however, is its long, sword-like horn protruding out of its forehead that resembles a unicorn's horn.

Diomedes is primarily based on the four Mares of Diomedes (also known as the Mares of Thrace) named Podargos, Lampon, Xanthos and Deinos. These animals were wild, man-eating horses that belonged to a king known as Diomedes of Thrace from the 'Eighth Labor of Heracles' tying in with Diomedes appearing as a horse in-game. In all versions of the story, Heracles kills Diomedes and feeds his corpse to the horses, calming them.

Diomedes is also the name of a hero in Greek Mythology. He is most known for his participation in the Trojan War, where the city of Troy was sacked by the Achaeans after falling for the ruse of the Trojan Horse.

This demon is also based on Sleipnir, the stallion of Odin in norse mythology, who also possesses eight legs. 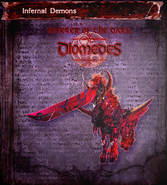 Diomedes about to strike Pain.

Diomedes and the Masked Lumen