Bayonetta
Dears and Decorations are angels of the Third Sphere within the Hierarchy of Laguna. They are the most basic and simple of the angels and infrequently throughout the first game, Bayonetta. Decorations are first seen in the Prologue Chapter: The Vestibule, though they are not properly introduced and given an entry, along with Dear, until Chapter II.

"With limited spiritual powers, this angel is spotted comparatively frequently within the physical, human world. Dears, with their dignified faces, are surrounded by the countless childlike faces of their Decorations.

Capriciously firing arrows, they are often mistaken for Cupid. It is said that one of their arrows, shot through the heart of a believer, can be as infatuating as the goddess of love."

Dear appear infrequently throughout the game, but when they do they are usually accompanied by a small host of Decorations. They are relatively passive and for the most part harmless compared to most other angels.

Dear: Larger and stronger than Decorations, Dear still have the most basic of combat skills when compared to other angels. They will charge up with energy before performing any of their offensive skills, giving plenty of warning to the player before they make their move. Their first attack is a simple spinning headbutt rush towards Bayonetta that travels a very limited distance at a slow pace. Their second attack pulls in energy and then folds the alabaster layer over their face away to launch an orb of energy at Bayonetta, this attack causes minimal damage, and the orb can be hit during Witch Time to knock it back towards the direction it came from. Their final skill is the ability to summon a small wreath of Decorations, which they can use to generate a large white shield around them. The Decorations and the shield will block incoming attacks, for the Dear. During this state the orbs of energy that the Dear launches cause much more damage, though are still easily dealt with due to their long visual cue of gathering energy. When becoming desperate the Decorations will swarm around Bayonetta and attack her.

Decorations: Even more basic than Dear, Decorations have only two basic attacks on their own, a simple spin headbutt attack similar to the one Dear uses, only being weaker, and traveling even shorter range and an attack that causes them to latch onto Bayonetta's head and bite her. Pushing the joystick back and forth repeatedly will free her from the Decoration's bites.

Because they are very basic, roughly weak, and largely harmless enemies, any weapon in Bayonetta's arsenal can be used to combat Dear and Decorations, though melee-based weapons such as Shuraba and Durga make combating them more difficult than it needs to be, however, once Crow Within and the Umbran Spear techniques have been unlocked, they can be used to make fighting them with melee weapons much more manageable.

Sai Fung: The huge number of ricocheting bullets that this weapon unleashes are quite effective as they will seek out Dear and Decorations that aren't even in view and damage and stagger them, interrupting any attacks they may be ready. Its Charge Modifier is particularly potent when used in small areas for taking out large numbers of these angels.

In Judeo-Christian mythology, Angels, malakhim (messengers or angels), are the lowest order of the angels, and the most recognized. They are the most human, and most concerned with humans, and were usually depicted as the traditional winged humanoids with halos that pervade popular culture.

Dear and Decorations both resemble Putti, pictures of child angels found throughout the Italian Renaissance, and Baroque art. 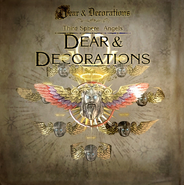 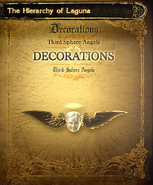 Decorations as seen in the Hierarchy of Laguna in Bayonetta 2

Dear from the angel model gallery.

Decoration from the angel model gallery.