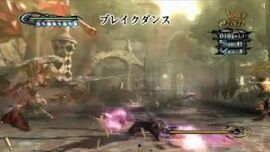 Break Dance is a Technique that can be purchased from the Gates of Hell in both Bayonetta and Bayonetta 2. When used by Bayonetta, she twirls around on her back while shooting her weapons at surrounding foes, finishing off with a sexy pose at the end.

Break Dance is activated by holding down the dodge button on its own. After a certain amount of time, Bayonetta will perform the move(s).

In the first game, the effectiveness of Break Dance can depend on what weapons are currently equipped on Bayonetta's feet. When used with any gun weapons, she will fire off numerous bullets as she twirls. Static weapons will hit enemies if they make contact with her feet. In Bayonetta 2, regardless of the weapon equipped, Bayonetta will always fire off rounds from Love Is Blue.

Break Dance still allows Bayonetta to move as she performs it, letting her deal great chip damage to weaker enemies while still allowing her to be mobile. However, the pose, in the end, does leave Bayonetta open to attack, so it is suggested to cancel out of the move before the end by jumping or dodging.

In Super Smash Bros. for Nintendo 3DS / Wii U, Bayonetta will perform the Break Dance technique as one of her victory animations when winning a match. When performing this, she will either say, "Dreadful," or "Don't make me beg."

The latter half of the move acts as her crouch animation.