Bayonetta
Braves are Cherubim of the First Sphere within the Hierarchy of Laguna. They are angels that always attack in groups of three.

"It can be said that Braves are capable of carrying God upon their shoulders. Moving in groups of three, each Brave wears the halo of the Second Sphere Powers upon its head; however, when necessary, Braves can combine three of their bodies into one true form, a First Sphere Cherubim.

Boasting the most brute strength of all the inhabitants of Paradiso, an unknown number of evils have faced judgment at the hands of Braves."

Braves carry large weapons that resemble a cross between an ax and a spear. They fight just like Beloveds, except their movements are much faster. If given the chance, these foes will combine into a Beloved.

Braves must be killed quickly if one wishes to prevent them from combining. Once defeated, you get the weapon to fight with, if available. 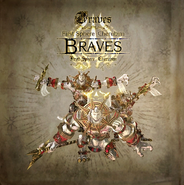 Braves as they appear in the Hierarchy of Laguna in Bayonetta

Braves as they appear when introduced in Bayonetta

Retrieved from "https://bayonetta.fandom.com/wiki/Braves?oldid=50350"
Community content is available under CC-BY-SA unless otherwise noted.