View source
主神ジュベレウスに栄光あれ
(May The Creator, Jubileus, Grace You!)― Beloved in Bloody Fate before dying

Beloved are Powers of the Second Sphere within the Hierarchy of Laguna. They are effectively the Laguna's heavies, wielding massive weapons in combat against Bayonetta. They are first introduced in Chapter I of the first game.

"Beloved is a member of the Second Sphere class Powers, ranked sixth in the angelic hierarchy. Its status is more that of a spiritual being, but it is also burdened with destroying the enemies of Paradiso. While still considered amongst the lower classes of angels, Beloved's power is of a far higher-order than that of a human, and even those with strong spiritual powers are seldom afforded the chance to meet this being. Excelling in combat, Beloved are known for brilliant exploits in demonic battles."

Beloved appear as mini-bosses early on in the game but become more common in later chapters. They are slow but powerful fighters with giant axes that give them great range. All Beloved have a large pulsing red node on their back, attacking this node repeatedly will allow Bayonetta to stagger, and when their health gets lower, stun them. Once stunned, the Beloved can be knocked around the battlefield using Wicked Weaves just like a normal angel, making a kill quite easily. Beloved come in several different varieties.

In certain fights, Bayonetta will be able to perform a Climax attack in which she summons the monstrous dragon demon Gomorrah. Once summoned it clamps its jaws down on the Beloved, and repeatedly bites it before either chewing it in half or devouring it completely.

Beloved A and B: Both carry a massive black and gold ax. However, 'A' has a child face while 'B' has a teenager's face. Their basic and most common attack is a long sweeping 180 cleave. This attack is especially slow and easy to dodge despite its power and range. They also have an overhead vertical version of this attack that they will use if Bayonetta jumps high enough out of their reach. Their second set of attacks are executed if Bayonetta is behind them if, on the ground near its legs, the Beloved will reach down and attempt to grab her if this succeeds it will begin squeezing her in its grasp and the Joystick must be moved back and forth quickly to allow her to break free. Its second attack in this set is when Bayonetta is in the air behind it, usually only when she's attacking the pulsating node on the Beloved's back. The Beloved will stand up straight and quickly turn 180 degrees in an attempt to backhand her. Its final attack is a stomping walk where it will attempt to crush Bayonetta under its heels. This attack also staggers her, and dodging it does not activate Witch Time. Killing the Beloved yields its ax for Bayonetta to use.

Beloved C: An even larger version and of Beloved that is more durable, powerful and has an old man face. It wields a much larger halberd-like ax and can use it to perform all the attacks of the basic A and B variations Beloveds. In addition, it also has tremendous magical power and is able to summon meteor storms. Using Moon of Mahaa-Kalaa, to counter these meteors will knock them into the Beloved and cause significant damage. It can also channel a massive beam of golden light from its forehead, though this attack is easily avoided due to its long cue and only going in a straight line. Bayonetta usually fights these as mini-bosses.

Beloved D: A more technologically advanced looking Beloved. It wears black armor and a set of night-vision looking goggles over its face, and instead of a massive Ax, it is equipped with a large rocket launcher. This particular Beloved appears only during Chapter XVI's missile riding sequence.

Beloved E: A variant of Beloved A who carries two golden tomahawks that feature in Chapter XIII of Bayonetta 2. It is encountered in three verses. In Verse 8, this variant will try to reach its hand to Bayonetta, while she can damage its arm. It eventually fell into a lava pit. He later returns in Verse 9 when Bayonetta, and Rosa are in the midway in a bridge. It pulls the bridge off and attempts to dip both witches into the lava. After dealing enough damage to its hands, it attempts to punch them only for the two witches to counter with their Wicked Weaves and pushes it into the lava. Bayonetta can use it to across the other side when she uses Witch Time. When the two reach the crescent-shaped table, they encounter the Beloved yet again, covered with lava and wielding twin tomahawks. After an arduous battle, it was eaten by Bayonetta's Labolas and Rosa's Gomorrah, ending the chapter.

In Chapter X: Paradiso - A Sea of Stars a pair of Beloved appear during the last verse, these Beloved function the same as type A and B however, their appearance is of their bodies coated entirely of strange, golden material, their axes are also entirely silver. Upon death, the Beloved will explode into very large sums of water that fill the ground of the area, their deaths are proceeded by golden-colored Inspired. This unique version of Beloved has no entry in the Hierarchy of Laguna or gallery model.

A Beloved makes an appearance in the animated adaptation of the first game. After Bayonetta defeats the angels in the church (and humorously lands on Luka's car), a Beloved appears and engages her in battle, demanding Bayonetta to relinquish her Left Eye of Darkness. Bayonetta manages to stun it by striking the red orb on its back, then summons Gomorrah to devour it. It's the only time it appeared in the movie.

In Christian mythology, the Powers are a class of angels that oversee the balance of power amongst mankind. They also keep the history of Heaven and inspire conscience amongst mortal men. 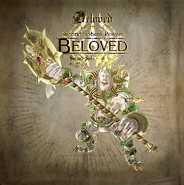 Beloved A preparing to attack.

Beloved A squeezing Bayonetta in the palm of its hand.

Beloved B about to be devoured by Gomorrah

The Golden Beloved from Sea of Stars.

Beloved A in the angel model gallery.

Beloved B in the angel model gallery.

Beloved D in the angel model gallery, with bazooka.

Beloved as seen in Bloody Fate 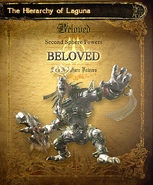