Belief is an angelic enemy that appears in the second game, Bayonetta 2. One of the first new enemies showcased in the initial playable demos of the game, it serves as a mini-boss similar to Beloved from original Bayonetta. Belief belongs to the Second Sphere: 'Powers' in the Hierarchy of Laguna.

The Hierarchy of Laguna

"Belonging to the Second Sphere, Beliefs are considered a Power, the sixth rank of the angelic hierarchy. Their sturdy, dominating size makes them an ideal candidate for giving orders on the front lines during wars with Inferno.

The gigantic snakelike right arm of Beliefs has caused them to often be depicted in legends as hideous creatures, but in reality, this feature is meant to be a divine whip for binding evil with its unwavering faith."

Belief is a towering monstrosity of an angel, almost the same size as the largest of the Beloved variants. It possesses a single tentacled arm, or dragon tail, for the majority of its attacks and a blank space where its other arm should be. It has a mixture of cherubic faces on its left breast that open up to reveal a spiked mouth and is adorned in the usual golden armor of most other angels. It also has a pair of small golden wings on its back.

Belief, despite its tremendous size, is an exceptionally fast angel that is able to keep up pace with a bullet train through running alone. It uses its tentacle arm to carry out a variety of different melee attacks as well as grab onto objects. The mouth it possesses can spit out a sticky green slime that freezes Bayonetta in place for a brief moment unless she breaks free. The tentacle can also grab Bayonetta and slowly drain her health until it smashes her back into the ground. When taking enough, Belief can be momentarily stunned, making it easy to catapult around the battlefield with Wicked Weaves. Belief first appear during the Prologue stage. After Bayonetta escapes from her jet fighter being destroyed, the angel chases her down whilst she's on the roof of a bullet train. Despite taking considerable damage from both Bayonetta and eventually Jeanne, Belief is able to survive as the bridge the train rides on is destroyed, forcing the two witches to both fight it at the same time. After whittling away its health, Jeanne kicks Belief away from the floating wreckage when Bayonetta gives chase. She summons Gomorrah to finish the angel off, again echoing a similar defeat for Beloved.

During Bayonetta's trip to Noatun, Belief appears multiple times throughout the rest of her journey, including one encounter during her vertical ascent through a tower which involves her summoning Baal to swallow the angel whole. Belief also appears during Chapter XIV when Bayonetta is sent back in time to the Witch Hunts, appearing in huge groups to bolster the angelic invasion force. They end up being no match for the power of the Umbran Armor.

Belief is not only quick to attack but is also 'tanky', meaning it can take a lot of punishment from weapons before it will even be staggered. This also means that it can continue to attack even when being assaulted, so dodging is imperative to survive again it.

In order to do the maximum amount of damage possible, the weapons Salamandra and Alruna are recommended to be used together. During Witch Time, Alruna can be used to grab Belief and slam it into the ground, momentarily stunning it and allowing for maximum damage to be inflicted thanks to Salamandra's swipes and hidden extra damage abilities. 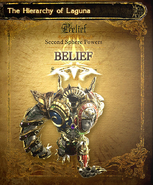 Bayonetta about to initiate a punish attack on Belief's head.

Jeanne before she kicks the Belief.