watch 01:46
'Bayonetta' Lore: Bazillions
Do you like this video?
Play Sound 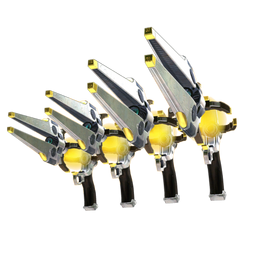 Bazillions are a set of four futuristic laser guns that are slightly more powerful than Scarborough Fair in the first Bayonetta game. They can be used in both the hand and feet slots.

"Four guns created by an unknown super-civilization. Powered by an energy source known as Bazillionium, the deep crimson flash from the guns instantly break down the molecular bonds within its target. Able to discern the intent of its user, it is said that these strange, miraculous guns have the power to open a portal to another dimension. Thanks to Rodin, the guns have also gained demonic powers, making them an incredible threat to the denizens of Paradiso."

To unlock these guns, complete all chapters on Hard difficulty,

The Bazillions function almost exactly like the Scarborough Fair, also being quite a quick well-rounded weapon. Using a Dodge Offset (holding Punch or Kick while dodging) will cause the Bazillions to fire numerous energy blasts as Bayonetta moves out of harm's way. All lasers fired by the Bazillions will ricochet off of surfaces at least once and attempt to hit nearby enemies. When compared to the Scarborough Fair their damage is slightly higher.

Bullet Climax: Bayonetta will stand motionless and take aim, allowing the player to manually aim at various enemies on the screen around her. Functions exactly like the Scarborough Fair's Bullet Climax.

Charge Modifier (Hands): When equipped to the hands, holding down

will cause Bayonetta to pause and charge up the Bazillions before firing two beams of light that will hit everything in a line in the path of her target numerous times before fading out, the beams will also temporarily stun any enemies smaller than a Brave (with the exception of Jeanne, Joy, Gracious & Glorious and enraged enemies). This attack has three separate stages of power depending on how long

is held before letting go:

will cause Bayonetta to fire off five disc-like shots of energy before transitioning into her next attack, the Charge Modifier for the feet version of the Bazillions functions almost exactly like the Scarborough Fair's Charge Modifier, though it does slightly more damage and has a bit better accuracy due to the projectile's increased size.

Retrieved from "https://bayonetta.fandom.com/wiki/Bazillions?oldid=50263"
Community content is available under CC-BY-SA unless otherwise noted.