N/A
Baal, also known as the Empress of the Fathoms, is a large toad demon that appears in Bayonetta 2. She manifests primarily during Umbran Climax attacks, although she appears once as a proper Climax attack against Belief.

"A royal inhabitant of Inferno. Concealing her form under most circumstances, she appears as a gigantic toad when summoned.

Baal's enormous, wobbly body is too heavy for her to control, giving her a disadvantage in the heat of battle; however, she possesses an endlessly extending tongue that can reach the far ends of the battlefield and swallow up opponents within an instant."

Baal is fully summoned the second time that Bayonetta encounters Belief in Chapter II. She wraps the giant angel with her long tongue and slowly drags it towards her as it resists, eventually swallowing it whole. Seemingly satisfied with her meal, Baal promptly disappears back into Inferno.

Outside of this instance during gameplay, Baal can also be summoned by way of Umbran Climax as an Infernal Weave, primarily with the dual whips Alruna. When summoned in this way, she will either whip her tongue in a circular arc or slam it into the ground, creating a shockwave that blasts enemies nearby. Baal can also appear during particular combos with Love Is Blue, where she will use her tongue to pull herself towards a foe and then spit it onto the ground, causing massive damage, or appear with Bayonetta on her head to vomit up a big blob of stomach acid as a projectile in a straight line over the battlefield.

Baal is summoned as the Torture Attack against Resentment. She slams the demon into the ground with her tongue numerous times, before drawing it into her mouth in an instant kill.

Baal manifests as a giant toad with a red and gold crown on her head nested between two horn-like appendages giving it a 'frog Prince' appearance. She has two rings at the side of her mouth which have two skulls dangling from threads, similar to earrings. Spikes also adorn the demon's back. Her long, red tongue is also covered with light-blue spikes. As if to emphasize Baal's gender, the demon has a noticeable chest.

Baal is named after one of the seven princes of Hell in occult writings. This demon was said to appear in the forms of a man, a cat, a toad, or a fusion of these creatures, tying with Baal's appearance as a toad in Bayonetta 2. 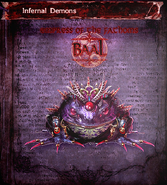