View source
主神ジュベレウスに栄光あれ
(May The Creator, Jubileus, Grace You!)― Ardor in Bloody Fate before dying

Bayonetta
Ardor is Principalities of the Third Sphere within the Hierarchy of Laguna. These angels are powerful fighters that support smaller angels in combat. They carry with them a large maple seed serrated sword and a segmented shield. It made it's first appearance in the first game, Bayonetta.

"The highest ranking member of the Third Sphere, Ardor are christened with the rank of Principalities. Presiding over the protection of the masses from evil spirits, they are equipped with a shield and armor of proof.

Wielding the power of Paradiso on those who encroach upon happiness, Ardor are recipients of much adoration from those seeking salvation."

Though Ardors appear similar to Applauds, they are much quicker, more powerful, and much more durable. They swing their swords in long cleaving attacks with surprising speed, allowing them to effectively combo Bayonetta with a series of high-damage attacks if she is caught off-guard. Though they cannot fly, they are much more agile on the ground than other humanoid Angels and have numerous attacks that they can use in close distance.

Their primary attack is a set of three sword swings, the first attack is an incredibly fast sword-thrust, which sets up for its slow sweeping attack, with the final attack being a spin-slash that is quick, powerful, and has deceptively long range despite its animation. When performing this combo the Ardor uses the weight of its swings to advance forwards, making a quick dodge to the left or right the most optimal way to avoid these attacks. The Ardor can also perform a long-dash attack, in which they will hold their sword over their head for a moment before dashing forwards while accompanied by beams of light, this attack does significant damage and allows the Ardor to close distance easily. In addition to these two attacks, the Ardor can also perform a jumping strike, leaping up after Bayonetta and then swinging its sword down vertically as it falls. If this attack connects it will slam Bayonetta back down to the ground, causing significant damage.

In addition to these direct attacks, the Ardor can also use its massive shield to defend against bullets and counter Bayonetta's melee attacks, knocking her off balance for a split-second, and possibly allowing the Ardor to counter-attack. After sufficient damage, the shield will shatter. Executing Wicked Weaves or using heavy firepower weapons like the Onyx Roses or Lt. Col. Kilgore will allow Bayonetta to break it much more quickly. Once its shield is broken, the Ardor becomes much more aggressive. Its attacks will become much faster and the Ardor itself will usually sprint to keep Bayonetta in melee range, however, it will be much easier to stagger and can be juggled more easily. It also has a tendency to enter a berserk state once its shield has been shattered.

Ardor B: A more dangerous variant of the normal Ardor, like Affinity E it is wreathed in flames and can only be damaged with ranged attacks such as Kulshedra and gunfire, or with Durga Fire. During Witch Time its flames do not harm Bayonetta and it can be attacked normally with any weapon. Combining it effectively during Witch Time will extinguish the fire that cloaks its body, allowing Bayonetta to deal with it more easily, however, when it recovers it will do a war-cry or taunt and reignite itself. Aside from this fiery state, it acts exactly like any other normal Ardor.

A single Ardor appears in the animated adaptation of the first game. When Father Balder teleports Bayonetta to Cereza's location, she finds the young girl surrounded by a group of Affinities led by an Ardor. Bayonetta defeats the Affinities and engages the Ardor in combat using 修羅刃 -Shuraba-, but the katana proves ineffective against the angel's strong red armor. Bayonetta then summons a large chainsaw and cleaves the Ardor in two, who shouts for Jubileus to grace Bayonetta with its dying words. It's the only time we get to see one in the movie.

In Christian mythology, Principalities are the third-lowest rank of angels and the highest of the third sphere. They take orders from the Dominions and inspire art and science, watch over large groups of people, and bequeath blessings to mortals. 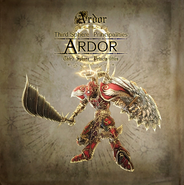 Ardor in the angel model gallery. 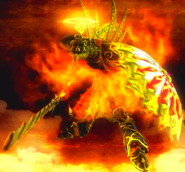 Ardor B, the flaming Ardor in the angel model gallery.

Ardor as seen in Bloody Fate