Applauds are Archangels of the Third Sphere within the Hierarchy of Laguna. They serve as the stronger grunts of Laguna's armies, usually appearing in pairs and accompanying Affinities on the battlefield.

"While still a member of the Third Sphere, Applauds are one step above Affinities, and thus known as Archangels. Occupying the eighth position within the nine-level Angelic Hierarchy, Archangels are still considered close to the physical world, and often come into contact with human kind. It is said that devoted prayer on the part of believers can call upon a flock of angels to come to one's aid."

Applauds are similar to Affinities, but larger, stronger, and much more durable. Their increased size gives them much farther reach than Affinities and by extension are more dangerous.

Applaud A: The more powerful of the two Applaud types. It carries a segmented weapon that can work as a bow or a pair of chain-swords. When at the range it will attach the two weapons together at their hilts and form a bow, which it will use to shoot golden arrows at Bayonetta. The visual cue for this is a bright golden gathering of energy, however, the audio cue is much more difficult to notice, being a faint high-pitched ring that is usually drowned out by the sound of battle. When it pulls apart its bow, it will hold the weapons like a pair of swords, and will completely change its style of attack and begin to swing its blades in wide slow arcs, charge up and spin-dash across the battlefield to damage Bayonetta directly, or stab its two swords into the ground, and unleash a line of impaling spines from the ground. Unlike other enemies, Applaud A has a propensity for being passive and seems to prefer flying while keeping its distance from Bayonetta. It waits for opportune times to strike, though it is still easily dealt with.

Applaud B: Acts much the same as a larger and more durable Affinity A. It carries the same golden staff with a rounded blade at its top. Like Affinity A, its staff makes an audible ringing as the blade at its top begins to spin before it attacks. It does, however, have a few skills unique to it, namely its ability to spin its staff quickly to parry incoming bullets and having a similar dash to Applaud B. It can also wield golden keys in combat, when wielding such a weapon it will mimic an Ardor's dash attacks, and generally does much higher damage while also being more aggressive.

Like Affinities, Applauds are easily dealt with by the player's preferred weapon combinations, that they seem fit, as they are still fairly basic when compared to other leveled angels. In other words, they're tutorial angels that can easily be beaten.

In Christian mythology, Archangels either occupy the second lowest or the very highest rank of angels. Additionally, there are seven specifically named archangels that stand before the throne of God. Gabriel and Michael are the only two named in 66 books canonical Christian Bible, with the others mentioned in various Apocrypha. 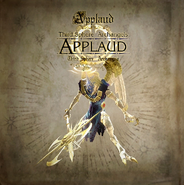 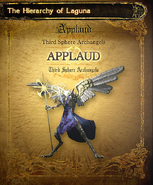 Applaud A, in the angel model gallery.

Applaud B, in the angel model gallery.