N/A
Antonio Redgrave was a world-famous journalist and the father of Luka Redgrave. Obsessed with the legends surrounding the Umbra Witches and Lumen Sages, he dedicated much of his time into researching Vigrid, their homeland, and became involved with the Ithavoll Group.[1]

In-game, he serves as the narrator for the Records of Time chapter and is the writer behind Antonio's Notebook fragments Bayonetta (the player) encounters throughout the game.

In Bayonetta, Antonio's real features are never seen. He is only physically portrayed in his diving gear having been the one to discover Bayonetta's resting place at the bottom of a lake.

In the film, Bayonetta: Bloody Fate, Antonio's appearance is of a middle-aged man with messy shoulder-length hair. He wears a brown hat and sports a jacket similar to Luka's own in the game complete with black gloves. The jacket has a scrap of blue cloth tied around the left sleeve with a knot and he also wears a beige shirt with a pair of dog tags around his neck on a chain. Antonio's appearance greatly compares to Luka's new look in Bayonetta 2.

Antonio's Notebook, with the picture of a very young Luka 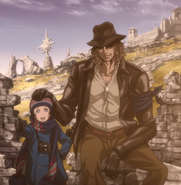