N/A
Alraune was the mysterious demon from Inferno who had managed to contain Jeanne's soul in captivity after being dragged into said realm to leech off of her power. Possessing a fierce rivalry and hatred for Madama Butterfly, she is later defeated and is made way for the creation of the infernal weapon, Alruna.[1] She is the secondary antagonist in the second game, Bayonetta 2.

"A woman who doused herself in mandrake poison and took her own life as a means of getting revenge on the husband who left her. The poison continued through her skin and devoured her soul. Consumed by hallucinations, she was at last reincarnated in Inferno.

Myth places her as the young daughter of a noble estate, but none of her past visage can be determined from her current demon form. She searches the bottom of hell for the most exquisite souls, then injects poison into their nerves to make them eternal "lovers" at her palace.

Insatiable desire and obsession have painted her heart so thickly that she will never know peace. Not even with the sacrifices of a thousand souls, or a million..."

As the major bossfight for Chapter XI, Alraune has a multitude of abilities at her disposal and has two major forms that must be fought in sequence.

In her first form, Alraune's primary attacks consist of using her sharp fingernails as claws, being able to lunge at Bayonetta, spin them in circular motions or use them in an aerial attack that slams into the ground. The nails have a long range due to their length but are telegraphed easily enough to trigger Witch Time. Alraune can also absorb Bayonetta's health piece by piece by attempting to rip the witch's soul out and can be escaped from by shaking the left stick, or by using a large vine to drain all of her life energy with a few seconds. Like the weapons that eventually gain her namesake, Alraune can also use a vine-like whip from her feet that can lash out during any of her other attacks on ground or in the air. She can place down large flowers around the battlefield that spew out a liquid which will restrain Bayonetta until she destroys them. Alraune will frequently transform into a flurry of flower petals during certain Wicked Weave attacks and negate them, similar to Bayonetta's own Bat Within ability.

In her secondary form, Alraune retains her upper body while her lower half becomes that of a reptilian-like creature. Due to this, she relies on the her claws to lunge at Bayonetta from afar as her primary means of aggression. Alraune is also able to use Jeanne's soul as an energy source to deal magical attacks, during which the Umbran seal will appear on her abdomen as a cue. Jeanne's soul, however, is also her weak point and Bayonetta must tear open her friend's prison piece by piece throughout the battle.

During the initial fight against Alraune, a similar approach to the Masked Lumen encounters must be used in terms of prioritising the triggering of Witch Time and speedy attacks before the demon either dodges or negates them. Because of this, weapons such as Rakshasa and even Alruna itself (only if the player has already won the battle before) are ideal to land quick hits whilst also maintaining the ability to dodge efficiently.

Alraune's second form is arguably more manageable due to her increased bulk and inability to negate Bayonetta's attacks as before. She is still fast, but less so than her initial form. Weapons such as Salamandra are ideal to dish out the maximum damage possible during this second phase of the fight, though the priority of Witch Time in order to do so safely must be upheld.

Her first form is a humanoid demon with a rose motif, purple vines/tendrils, and sharp nails. Her attire is similar to that of a dress complete with high heels.

Her second form is a giant lizard-like beast with skinny human-like arms and legs. She has a grey body with a pulsating purple bulge in the middle, a large, long tail covered in red spikes, a purple fearless egg shaped head and on top of the head Alrune's first form's upperhalf.

Alraune is shown as being vengeful and quick to anger, seen through how she reacts to Bayonetta's destruction of her domain. Despite this, she also displays that she is capable of mercy when she decides to initially forgive Bayonetta's trespassing of her palace, though it is seen how quickly that passes when Bayonetta damages her palace. Alraune also displays a side of overconfidence when she claims that with the power of Jeanne's soul that she could rule Inferno itself. She carries an air of poise and confidence that can be easily threatened by the defiance of another, especially if it is by her most hated rival, Madama Butterfly.

Allegedly born as a noblewoman, Alraune was once married to an unknown man. However, she took her own life with the use of mandrake poison as a way of getting her revenge on her husband. She was then reborn in Inferno as a demon and made herself known by abducting exceptional souls, consuming and dousing them with her own special poison to make them her "lovers".[2]

As Inferno is a place where power means everything in terms of who rules over who, Alraune was quick to take a hold of Jeanne's soul when it entered her realm in order to make herself stronger. When Bayonetta forcefully enters her palace of vines, Alraune is initially angry at the witch for trespassing into her territory but gives her the option to leave immediately so she will be spared. Bayonetta, in no mood to parlay with the demon, responds by causing even more destruction with the help of Madama Butterfly. Alraune, realizing that Bayonetta is not only an Umbra Witch but that her pact demon is one that she has hated for millennia, quickly launches into battle to destroy the intruders.

After Bayonetta defeats her for the first time, Alraune curses her opponent before transforming into a secondary form using the power of Jeanne's soul inside her new body. Bayonetta fights her one more time and eventually rips Jeanne's soul free, defeating the demon. Before Bayonetta's contracted ally, Madama Butterfly, can deliver her final hit, Rodin stops Bayonetta from killing Alraune and insists she take care of Jeanne before sealing the demon inside one of his new creations: Alruna. 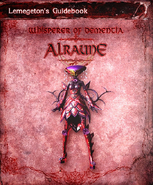 Alraune, about to claim Jeanne's soul for her own

Alraune after she first appears to Bayonetta

Alraune, delusional about her power. 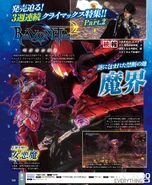