Allegiance is a large centaur-like angel in Bayonetta 2, taking on a similiar form to Acceptance and Accolade. Though similar in appearance, Allegiance is a much more formidable foe and could even be considered to be a sub-boss. It belongs to the Third Sphere: Principalities.

It could be considered the counterpart of Ardor, being a heavily-armored and most powerful version of the basic angelic grunts.

"Allegiance belongs to the Principalities, ranked seventh in the angelic hierarchy and part of the Third Sphere. While Third Sphere angels are the most common type encountered in the physical realm, Allegiance, clad in solid gold armor, appears only during times of strife between Paradiso and the human world, in order to purge the armies of evil spirits.

Legends exist of Allegiance appearing before the kings of feudal nations who have prayed for the emergence of a hero; however, there are also stories of Allegiance seeing through the evil in these kings' hearts and instantly reducing their thrones to rubble."

Like its smaller counterparts of Acceptance and Accolade, Allegiance maintains the centaur theme, but is covered completely in thick golden plated armor. It possesses an extra set of arms and is of a similar size to the Accolade C variants. It wields a long golden sword that it can extend in a whip-like fashion and it becomes doused in flame whenever it is used. The shield in its other set of hands maintains solar imagery similar to that of the Lumen Sages which can separate into smaller sections.

Allegiance first appears during Bayonetta and Loki's brief trip into Paradiso during Chapter VII and appears sporadically throughout the rest of the game in Muspelheims and other Verses. It is a tricky enemy even to fight in isolation due to its habit of blocking the majority of Bayonetta's attacks, making Witch Time essential in dealing damage.

Allegiance can utilize both of its weapons in different ways. As mentioned before, its sword can separate into segments like a whip, giving it a huge amount of range with its standard slashes and stabs. It can also embed the sword into the ground, causing the tip to explode upwards underneath Bayonetta in a burst of flame. The shield it carries can also split apart and be used in two different ways. Allegiance can either spin the segments around itself to provide additional protection or it can target them around Bayonetta where they will hover in place for a few moments before firing at her. This is similar to the feather based attacks the Joys used in the original Bayonetta.

Though it may be tempting to use a weapon like Takemikazuchi to break through Allegiance's defences, the angel's speed versus the weapon's slowness makes it difficult to land the particular blows needed. Witch Time is therefore the safer option. As Salamandra is one of the few weapons that can deal high damage and also prevent Allegiance from blocking an attack mid-way through a slash, utilizing them when the angel is slowed down is an optimal strategy.

As a side note, when playing as the Masked Lumen in Tag Climax mode, one may notice that Allegiance is very vulnerable to the Masked Lumen's version of Bayonetta's Heel Stomp, as well as his spell which causes fire to erupt from the ground, and when he calls a beam of light to shoot from the sky. The best strategy against Allegiance could simply be to attack from above, below, or behind, if possible.

In Christian mythology, Principalities are the third-lowest rank of angels, and the highest of the third sphere. They take orders from the Dominions and inspire art and science, watch over large groups of people, and bequeath blessings to mortals. 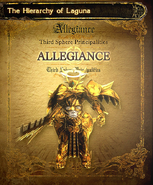