Affinities are angels of the Third Sphere within the Hierarchy of Laguna. They are the first type of angel to appear in Bayonetta, often seen in large groups and accompanied by other angel types like the Applaud and Beloved.

"Servants of Heaven that populate the lowest of the angelic hierarchy, a Third Sphere rung known simply as Angels. Humans with deep faith often feel these angels closest to their hearts. Descending from the heavens upon their pure white wings, it is believed that the glimmering halo atop an Affinity's head lights the path for those who have lost their way.

The religious articles they equip are all tools used to further their conviction to protect the righteous and can become powerful weapons used to strike down those with sullied hearts."

There are three types of Affinities, each with a different weapon and a unique attack. At low health, Affinities perform a war cry and go into a berserk state, where they become resistant to stagger effects and attack faster than normal.

Affinity A: Carries a long golden staff with a circular, spiked headpiece. While the Affinity prepares to swing its staff, its headpiece makes a distinct high-pitched ring as a cue for the player to dodge. On harder difficulties, the swinging attack is much faster, and the Affinity uses a fast cleave with no sound cue.

Affinity B: Carries a trumpet, which fires pink and gold orbs of energy from a distance. This Affinity loudly blows the trumpet when about to fire, which signals the player to dodge its attacks even when it's off-screen. During Witch Time, Bayonetta can attack the orb to deflect it and damage any angels in its path.

Affinity C: Carries a sousaphone that fires a long, powerful beam that arcs across the field; unlike most angel attacks, the beam also damages any angels in its path. This attack has a long charging animation and a loud audio cue, which make it easy to dodge.

Affinity D: Carries a large black and gold flail, which it spins over its head before attacking. Its attacks deal the most damage out of all Affinities and are difficult to interrupt, due to its far higher stagger resistance.

Affinity E: The most difficult of the group, it is a less aggressive variant of Affinity A that carries a black halberd. It is wreathed in flames, which means using regular melee attacks on it will make the player flinch and take damage. It can only be damaged with Durga Fire and ranged attacks like gunfire and Kulshedra, but hitting an effective combo during Witch Time will extinguish the flames and open it to more attacks. When it recovers, it will taunt and reignite the flames. On harder modes, it attacks much more aggressively.

Affinities, being the basic grunts of the Angel's armies, are easily dealt with through the use of any weapon in Bayonetta's arsenal. This means that they can be easily fought with your preferred weapon combinations of the player(s) choices.

In Judeo-Christian mythology, malakhim (messengers or angels) are the lowest order of the angels, and the most recognized. They are the most humanoid and most concerned with humans and are usually depicted as the traditional winged humans with halos that pervade popular culture. 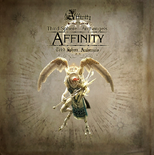 Affinity A and Affinity D

Affinity A in the angel model gallery.

Affinity B in the angel model gallery.

Affinity as seen in Bloody Fate 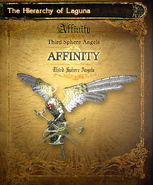